IDLES’ lead singer Joe Talbot talks to us about rusks

Post-punk Bristol five-piece IDLES always play like their lives depend on it and R&L will be no different.

Raucous, gritty punk is alive and well thanks to IDLES. Their debut album, ‘Brutalism’ practically punched us in the face with the sheer grit and determination that’s evident from the band. We sat down with lead singer, Joe Talbot to chat about their journey so far and what they’ve got planned for Reading and Leeds. We had to sensor quite a bit, so just use your imagination with what we left out.

We’re a happy, angry, punky, post-punk band, who will fill your life with joy and pain. If you see us, we’ll be very happy, if you don’t – I’ll set my friend Dev on you.

How did you get into music and form as a band?

Well, we were all DJing. Dev and I were doing an indie night back in 2004 or whatever. We just got sick of playing everyone’s f*cking music so we decided to do it ourselves. We started singing into a lampshade and singing other people’s songs, just to learn from each other a bit. Then we kind of picked up members as we went along, lost a few on the way… they’re not dead, they’re alive and well.

We were hanging out with our old guitarist last night at The Maccabees gig actually, so that was nice to see him! Anyway, we met through DJing Bowen was a techno DJ, I was doing a hip-hop, indie and punk night together with Dev. Then we just decided to do our own thing, it was a bit stagnant at the end and there was a bloated indie scene, you know? There was a lot of nice clothes horses but not much substance. We just tried to be something different and bring back the kind of post-punk rhythm section that we missed.

Is there anyone specific that you drew inspiration from?

Yeah, at the start we drew heavily on Joy Division and Gang of Four. Bands that were around at the time that we loved, I can’t remember who that was at this point. There was a lot, anyone with vigor and a good rhythm section, like Mets or Sleaford Mods. I always draw a blank when people ask me that question, but give me a few pints and I’ll chew your ear off for hours about music, it’s annoying. Honestly, just say Joe Talbot, lead singer from IDLES says his inspiration is good music from the 70s.

If you could pick any song that sums up IDLES’ journey so far, what would it be and why?

Umm, ‘1049 Gotho’ because it’s about depression, I drew the lyrics and the idea from talking to a friend, which is where I get a lot of my stuff. It’s just drawing on conversations and little vignettes in time, things that I’ve just picked up on and taken away. You get these little tiny vignettes in life that kind of sum up huge things but in a really short space of time, maybe even just a sentence – and I love that. That was that song, my friend came back after a bender and he suffers from depression, like actual depression and he was explaining it to me in a really simple way that changed my perspective. I’ve never suffered from depression, I’m very lucky. He just explained it in a way that made me change my whole perspective on life really, so I wanted to write a song about it and I think we all play well on that song, it’s got an amazing bass line, the guitars don’t play too much and they play just not enough. I’m proud of my lyrics in that song, if you want to hear what we’re about phonetically and sonically, I think that’s our song.

You’re known for your live performances, what can we expect from you at Reading and Leeds?

Honestly, if we’re in a good mood you’ll get a great happy gig. If we’re in a bad mood you’ll get a good bad mood gig. If we’re pissed off, we’ll be pissed off, if we’re sad, we’ll be sad. Whatever it is, we give it everything. We’re always grateful playing on a Reading and Leeds’ stage, it’s like a dream come true so we’ll show that as best as we can.

What’s the weirdest thing anyone has ever thrown on stage at you?

Out of all of you who can pitch a tent the best?

Lee, our rhythm guitarist. He can pitch a tent the best because he’s meticulous, he works hard and he’s got patience. He’s a recovered alcoholic hanging out with a bunch of alcoholics, he’s just a very patient man but he’s fastidious and amazing. He always reads manuals when he buys a new piece of kit, he does all the research and finds the best on the market with what works best with what you need. He’s a fascinating man, I love him. 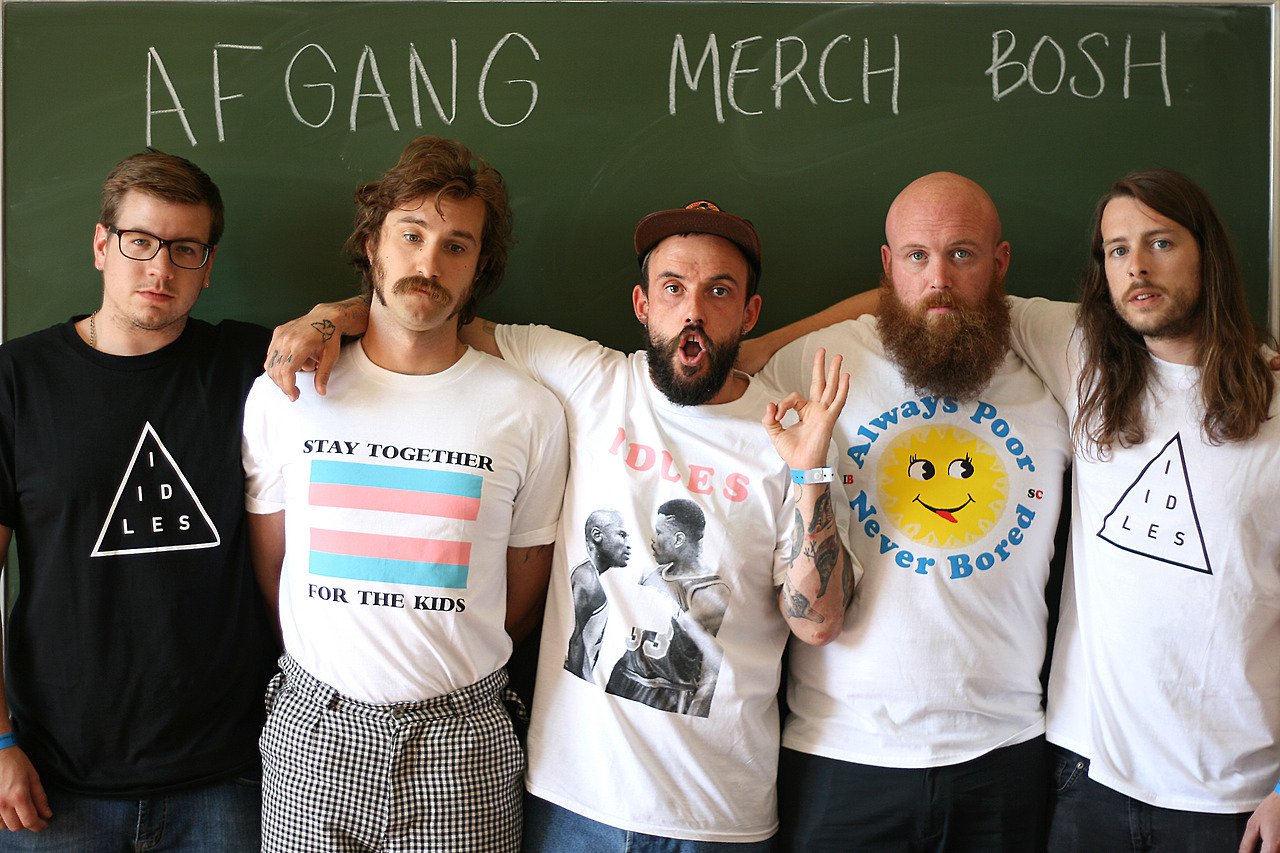 He sounds like he’s very handy to have around.

I pitch a tent the best actually because I just get in other people’s, every festival I go to. Don’t get a pop up one, because no one can figure out how to get them back into that figure of 8 to put them away again.

If you could share a dressing room with anyone on the line up, who would it be and why?

I’m going to go with Danny Brown, all the interviews I’ve seen him do, I absolutely love him. His energy, he seems like we could be friends. I’m hoping that we can be friends after R&L, I want him in my phonebook.

If you could collaborate anyone on the line up who would it be and why?

Major Lazer because they encompass everything that I grew up with. I love the way they encompass multicultural sounds. There’s bashment in there and hip-hop and ragga and dare I say it… dubstep. There are all these sounds just pummeled into one record and I’d love to be able to just shout on top of one of their songs, and go to one of their parties because their sound system is incredible, I love that.

If you had to choose one item to take to a festival what would it be any why?

A lighter to throw needlessly at people or that Nokia phone that lasts for 7 days without charging, it blows my mind, I’m like how the f*ck is this still going. Also my girlfriend, I love her being by my side at a festival.

What’s your one festival must-have snack?

IDLES bring their angry-punk sounds to Reading and Leeds 2017. Join the pit with us by making sure you grab your tickets now.