Because all you can do is laugh sometimes.

Comedy has long been an important part of the fabric of Reading & Leeds Festival, and in a year that’s had its ups and downs, it has never been more important.

Join the master of words himself, Luke Wright, as well as the Young People’s Laureate for London – Cecelia Knapp for some poetry, and the Youth Climate Justice Coalition for their own words of wisdom.

And it doesn’t stop there – Reading will see Alternative Stage regulars Buttoned Down Disco take to the stage for some late-night bopping , whilst Leeds will see our favourite “Shedonists” Disco Shed transporting you to a shed like no other. 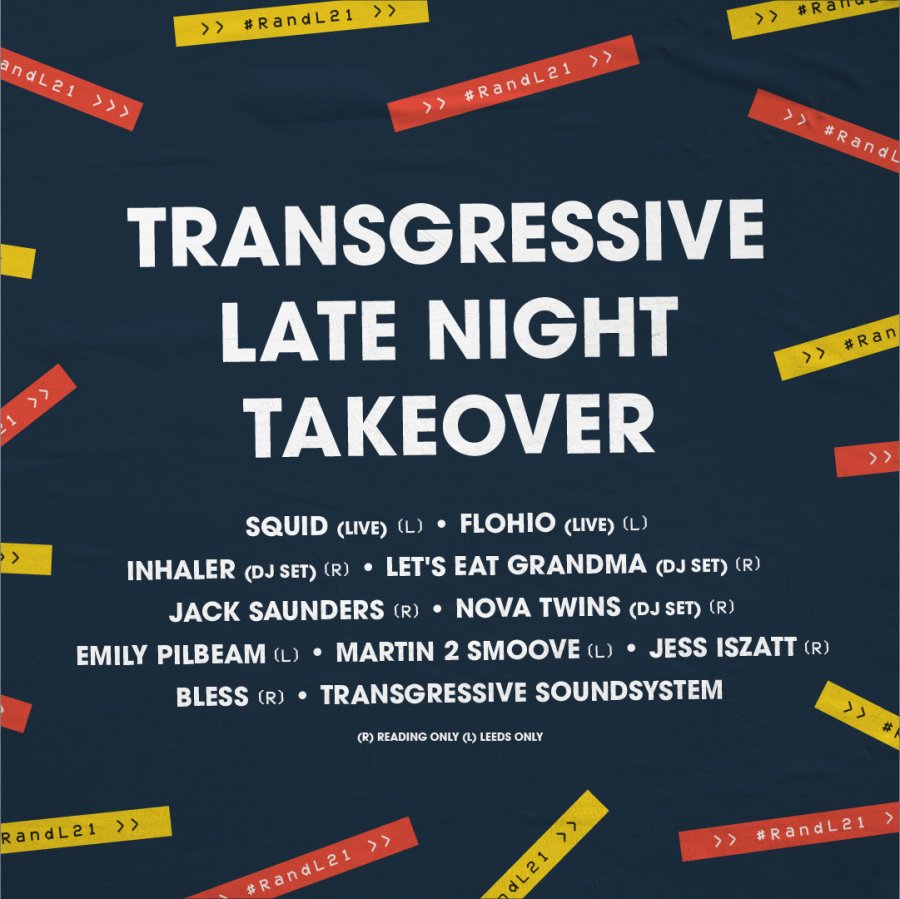 Late nights at Reading & Leeds just wouldn’t be the same without the Transgressive crew commandeering the Alternative stage after hours!
The Takeover will once again occur at Reading on Friday and Leeds on Saturday and Sunday night. With an added sense of celebration for the restart of live music and being together again, the theme this year will be ‘house-party’, live and direct from the Alternative Stage – boasting a host of unmissable, exclusive performances from major acts and brand new names.

Friday night at Reading will continue the collective’s now long established special DJ ‘battle’ set-up, featuring a number of talented artists and the team’s resident DJs pitted against each other in who can get the biggest sing-alongs of the weekend during a silent disco. A packed stage each and every year, this year will see the likes of BBC Radio 1’s JACK SAUNDERS, JESS ISZATT (BBC Introducing), Transgressive signings LET’S EAT GRANDMA, recent number 1 artists INHALER, TRANSGRESSIVE SOUNDSYSTEM, BLESS and more behind the Decks all night long.

Saturday night in Leeds will be a huge Transgressive House Party line-up featuring a live set from progressive indie-dance quintet SQUID, fresh from a breakthrough year with a top-5 debut album, bringing their frenetic live show to the late night stage. The band will be followed by a special “Battle of the Bands” themed double DJ set-up, fresh from 2019’s memorable tent-filler, with Transgressive Soundsystem and BBC Introducing’s Emily Pilbeam pitting the likes of Oasis against Blur, Arctic Monkeys against The Killers and more, in an all-out classics party till (near) dawn.

Sunday night will feature one of the most exciting new acts in UK hip-hop, FLOHIO, appearing live in another exclusive late evening set for the festival, for what will be surely a huge closing party. Capping the final day action will be a return of the two station battle DJ sets pitting the UK against the US in a rap showdown, ensuring that iconic bangers from Jay Z vs Skepta, Stormzy vs Drake, and more ensuring the singing and dancing will continue long into Monday morning.

Kicking off each night at 9.30pm and carrying on til’ very very late.