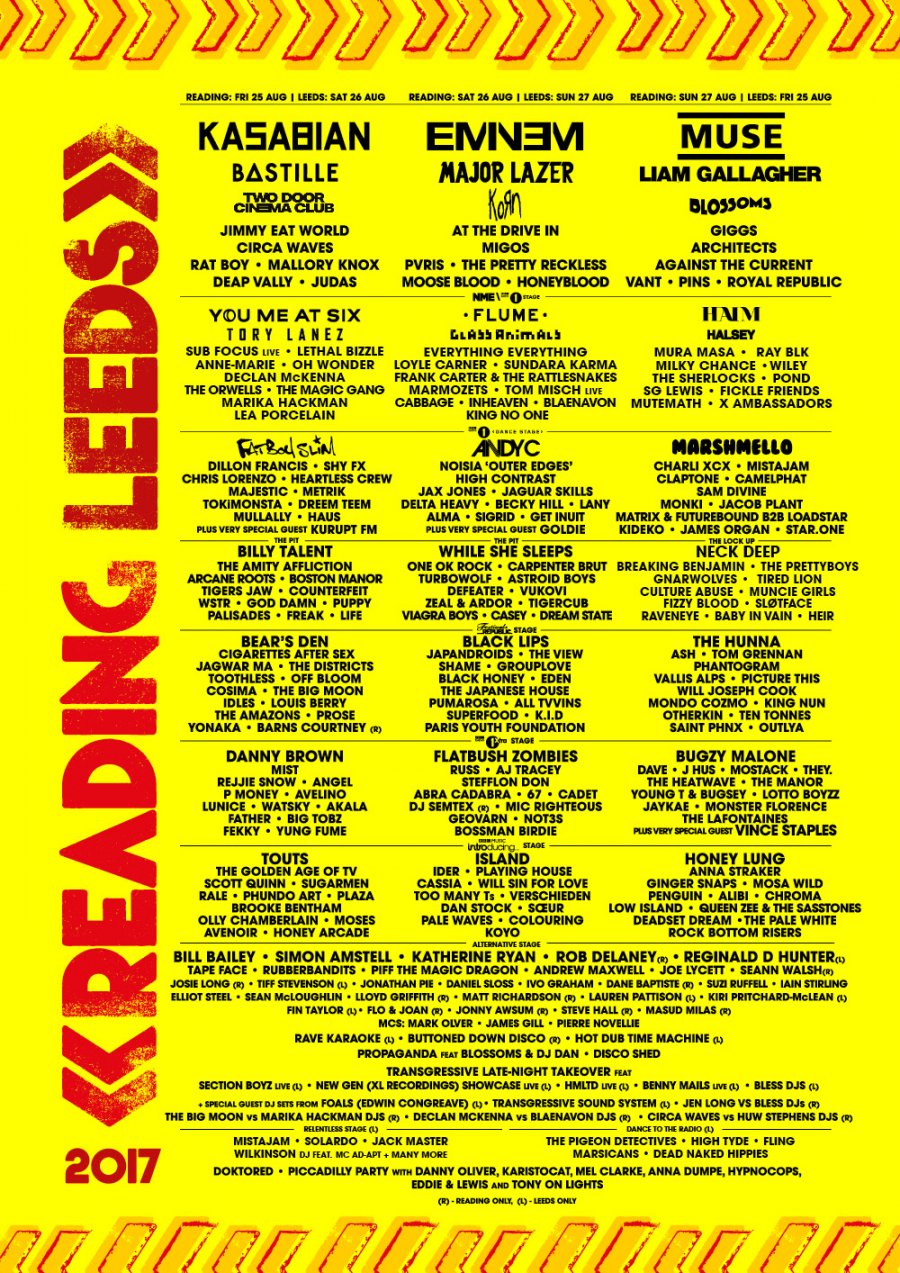 The year’s festival kicked off on the Main Stage with a triple whammy of Deap Vally, Mallory Knox and Ratboy – after an opening set by Judas.

Deap Vally are a duo from LA, in a similar drums and guitar format to the White Stripes and Royal Blood (though they use a bass instead) and produced a noise that pleased the sunbathing crowds.

“It was awesome to be on the Main Stage at such a legendary festival and it was ‘strangely’ warm and sunny, it made us feel like we were back home in Los Angeles. I found out about the ‘secret’ Queens of the Stone Age set and we’re gonna stick around and try and catch that, as we love those guys and we’ve played a few shows with them, they’re great, the best.”

“I was pretty stoked about how many people were watching on the Main Stage. There were people as far as the eye could see and it you could see lots happening and carnival rides, it was very entertaining from where I was. I hope we can catch Queens of the Stone Age, they are my favourite ‘living band’, I hope to watch them from the side of the stage, which will also be packed.”

The Main Stage finished with a British triple with Two Door Cinema Club, followed by Bastille and then the headliners – for the second time – Kasabian, ending the first day on a massive high. With songs included from their new album ‘For Crying Out Loud’, a cover of the Nirvana classic ‘All Apologies’ and a guest appearance by Noel Fielding – of ‘the Mighty Boosh’ – during ‘Vlad the Impaler’, it was an amazing end to a great opening day of the festival.

Across the other stages, we saw the return of Canada’s finest, Billy Talent causing a punk rock riot on The Pit Stage. A band that has gradually scaled the festival line up over the years, You Me At Six showed that they were indeed ‘Night People’ and a rare Reading Festival performance by a dance DJ Legend – Fat Boy Slim made us dance through to the end of the first day on the NME / Radio 1 Stage. Queens of the Stone Age also filled the tent for their ‘Secret Set’, which by the time they arrived was not so much of a secret.

“It’s nice to be back in England, we’ve just spent five and a half weeks in Eastern Europe. We’re headlining The Pit Stage and it’s an honour for us to be the top of the bill. When you look at the rest of the line up and see all the other people, it’s very cool to be right at the top. I checked out Arcane Roots and they were really cool, we rolled in around 4pm and we did a lot of press, but I’m going to run over to the NME / Radio 1 Stage to catch Queens. We also played when Green Day did their secret set years ago and I had a coffee and a banana as I watched them, it was the best.”

The Main Stage on Saturdayas mainly an ‘American Day’ with only the openers Honeyblood, from Glasgow, not coming from the United States. The line up was split into a rock element in – Moose Blood, PVRIS, the Pretty Reckless, punk legends At the Drive In and the Reading Festival debut of the nu-metal legends Korn – and a dance/hip hop element with – Migos, Major Lazer and Eminem, who was back to headline Reading & Leeds for the third time.

Frank Carter and the Rattlesnakes and Marmozets were a big draw in the afternoon on the NME / Radio 1 Stage and local Reading boys Sundara Karma continued their ascent of the festival line up.

Korn had a large crowd, but none bigger than the crowds that Major Lazer and Eminem gathered, with the boy from Detroit back for his third headline performance, equal to Muse who would headline for their third time the next day. Eminem filled a set with not only his own songs and many hits, but covers of songs by The Weeknd, Lil Wayne, B.o.B, Drake and one from his side project, Bad Meets Evil. With a set that featured over 30 career spanning songs, Eminem was an amazing end to another remarkable day.

On other stages, While She Sleeps headlined The Pit, having risen from opening the Main Stage in 2013. One OK Rock from Japan played in the special guest slot – already an arena sized band in their home country.

Then that was another day over and just one final day to go, but what another great day it was going to be.

The final sunny day began, with several up and coming bands The Xcerts, Vant and the first of the days’ Manchester contingent PINS taking to the stages.

The first of three rock bands on the Main Stage followed with Against the Current from New York. With a huge crowd who screamed back all the words like their lives depended on it, they were the perfect addition to the Main Stage. Next up were the ‘heaviest’ band on the Main Stage all weekend, Architects. Brighton’s finest metalcore band brought the rock to Reading with circle pits and crowd surfing in abundance.

“We’re very excited to be playing the Main Stage, we think that we are one of the heaviest bands at the festival and one of the heaviest to play that high up? We are stoked. We like being the ‘sore thumb’! We’re flattered to be on at this festival.”

“It’s really significant for us because a bunch of us went here as punters. I was here when I was fifteen and when I was sixteen camping and it’s a massive deal. Making the transition from the tent to the Main Stage is a big jump, it’s been a long journey, but it feels really cool. It has a massive cultural significance in the music scene in the UK and it makes it all the more nerve wracking for us, but it’s really nice. Sitting a few places below Liam Gallagher and Muse, it seems fictional, they’re like as a real as Marvel superheroes and so to be up there with them it’s like winning the lottery.”

Giggs’ following set had to be noted for him bringing on his ‘friend’ Drake for a cover of ‘KMT’ – possibly the biggest crowd made a move ‘en masse’ towards the Main Stage when the shout went out that Drake was there.

Blossoms came and filled the Arena once more and then the crowd built and stayed for the next artist, playing his solo debut at Reading, the ex-Oasis front man Liam Gallagher. Coming on to ‘Rock ‘n’ Roll Star’ and then going into ‘Morning Glory’, the crowd were lapping up his nostalgic set. Also featuring four more Oasis songs, tracks from his soon to be released album and one Beady song, Liam was on fine form.

The final act of the weekend on the Main Stage was Muse, back for their third headline appearance and possibly their best set at the festival. With tracks culled from their vast back catalogue, there was something for everyone and then they pulled a ‘surprise guest’ out of the bag with an appearance by the ex-AC/DC front-man Brian Johnson, for a note perfect run through of ‘Back in Black’, the crowd went wild and Brian proved he could still perform with no problems. With nineteen top tracks from their classic albums, they finished with the usual ‘Knights of Cydonia’ and with that the Main Stage had finished and another festival was over.

Haim, Marshmello, Neck Deep and The Hunna, closed the festival across the other stages and then that was it, another year drew to an end, just after Don Broco played a secret set as The Pretty Boys in The Pit.

This year has to be remembered for the great mixture of genres and the guest appearances.