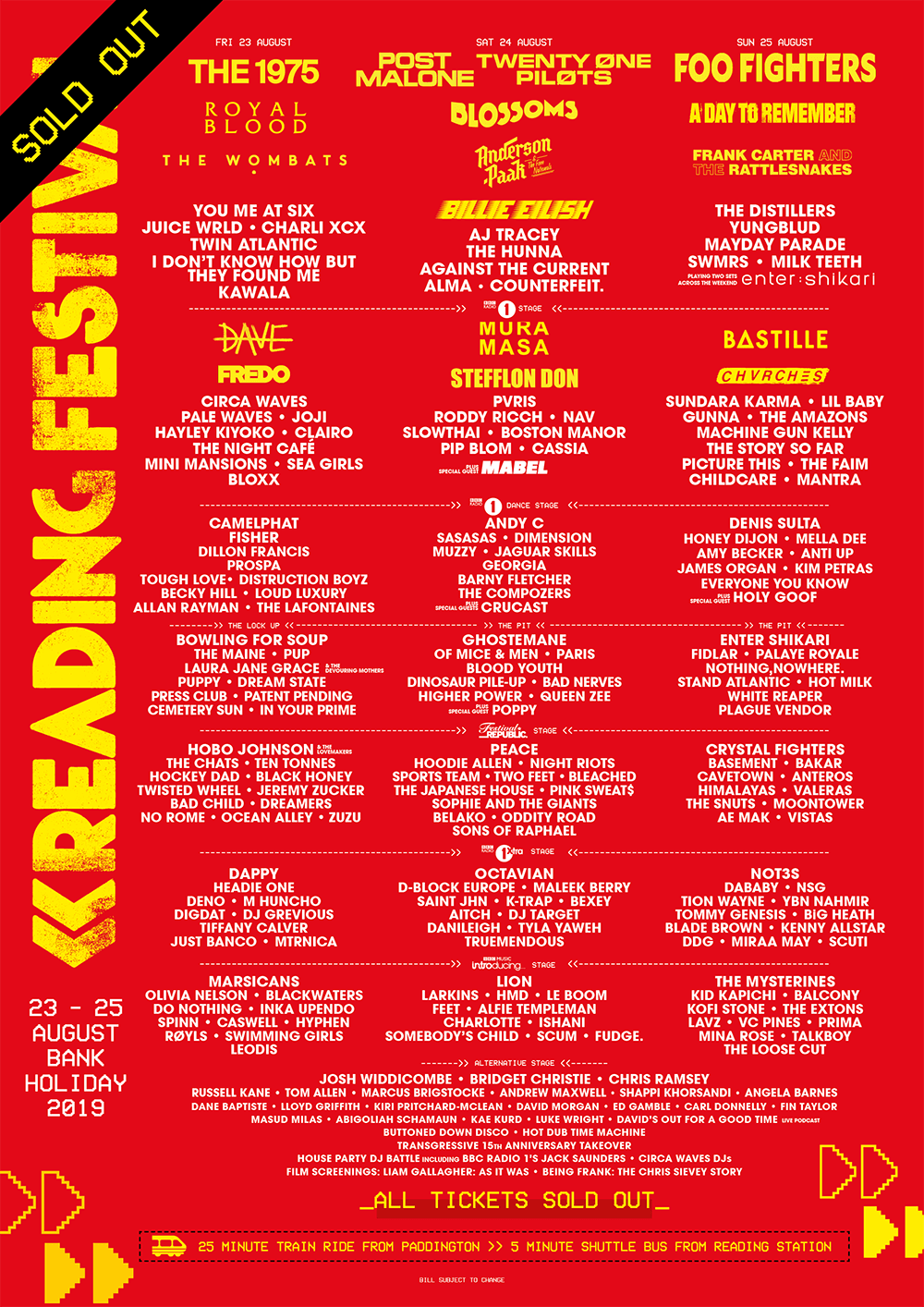 After selling out another year, Reading 2019 was always going to be immense. Factor in the glorious sunshine beating down onto Richfield Avenue and it was obvious why there was a neverending sea of happy campers. With headline sets from The 1975, Post Malone, Twenty One Pilots and Foo Fighters – this was a weekend that will go down in history as one of the hottest and best Reading Festivals yet.

If you were looking for the ultimate party, you didn’t have to go far. Charli XCX tore up the Main Stage with boundless energy with a smattering of nostalgia. Taking us back to the 90s with ‘Spicy’, a reworked version of the Spice Girls song, ‘Wannabe’ and smash hit throwback track, ‘1999’. Charli gave it her all – her constant, energetic dancing and never faulting vocals stole the show, with the crowd mirroring her unlimited energy.

The BBC Radio 1 Stage saw a whole host of unmissable sets on Friday from the breakout Boston-native Clairo, to Joji’s minimal trap-infused tracks. Yes, he really was the guy who once at a cake made out of human hair. South London’s finest, Dave took on headliner duties for Friday night, pulling in a crowd that saw the tent bursting at the seams – it was clear to see Dave is a future Main Stage headliner in the making.

Closing Reading’s Main Stage were the mighty The 1975 – their debut appearance on the Main Stage saw the band open up with their first-ever live performance of ‘People’ taken from their unreleased album, ‘Notes on a Conditional Form’. With Matty’s iconic treadmill, groove-fuelled dancing and constant interaction with the crowd, their performance made for an unforgettable and intimate show.

Saturday may as well be described as when Billie Eilish totally nailed Reading Festival. Pulling in one of the biggest crowds of the weekend, Billie launched onto the Main Stage with her huge hit, ‘bad guy’. Getting the entire Arena jumping up and down, it was clear to see why Billie is one of the voices of our generation. She’s been one of the most raved about artists of this year, and her effortlessly cool performance proved she’s a star that’s not going anywhere.

If the never-ending costume changes, burning car and fireworks display didn’t prove that Twenty One Pilots weren’t here to mess around, nothing will. Smashing out the hits from their album, ‘Blurryface’ and ‘Trench’ Twenty One Pilots’ fans revelled in the two-piece’s first UK festival headline performance. During the closing run of ‘Car Radio’, ‘Chlorine’ and ‘Trees’, the band members were seldom on the stage. Dunne played his drumkit from atop the crowd while frontman Joseph climbed a ladder that was, it must be said, far too high. You had us scared for a second, Tyler.

Closing the Main Stage was none other than Post Malone – climbing the ranks of Reading’s Main Stage billing, he absolutely smashed his headline set… and guitar. Only two albums into his career, Post Malone is a one-man hit factory, firing out back-to-back bangers like ‘Better Now’, ‘Candy Paint’ and ‘Psycho’ like it was no big deal. It’s a well-known fact that the single most rock star thing anyone can do is smash a guitar, which Posty does with ease at the end of the aptly named single ‘Rockstar’. Both Twenty One Pilots and Post Malone proved tonight that being a rock star is about more than just music. The theatricality and attitude of both acts is fully in-keeping with Reading Festival’s history and future.

Over on the BBC Radio 1 Stage, Aitch was in the place. After his meteoric rise to the top in 2019, Aitch opened up the pits and got the audience striking a pose. If it was more mosh you were after, Slowthai didn’t disappoint. The 24-year-old thrilled fans with his grime and political hip-hop and added fuel to masses who gathered in the tent to watch him.

The last day of Reading Festival 2019 needed to end with a bang – and you can sure as heck guarantee that Foo Fighters will deliver that on every level. Imagine having so many hits that you can open with ‘The Pretender’ and have your set only get better from there. Are you imagining it? Good, because that’s what Foo Fighters did for their epic set closing the Main Stage on Sunday night.

Pumping out hits like ‘These Days’, ‘All My Life’ and ‘Monkey Wrench’ like it was no big deal, it was the deep cuts that elevated this Foo Fighters performance. ‘Hey, Johnny Park’ and ‘For All the Cows’ in particular were a welcome to throwback to the band’s 90s performances. One of the best moments of all was when Dave brought out none other than Rick Astley to perform a rocked-up version of ‘Never Gonna Give You Up’. Yes, Dave Grohl really did Rick Roll Reading Festival.

Over on the BBC Radio 1 Stage, Bastille closed out the night with a dazzling headline set. No stranger to Reading Festival, it was like they were home again. Their set was dripping with 80s-synth pop-influenced tracks emblazoned with their signature catchy lyrics. A standout moment included their all-time festival bop and crowd-pleaser, ‘Pompeii’, complete with confetti cannons and inflatable balls amongst the crowd – this was the perfect end to a perfect weekend.

It wouldn’t be Reading Festival without a secret set now, would it? Having already been treated to secret sets from The Sherlocks and Enter Shikari over the course of the weekend, Sunday saw one of the biggest surprises of them all. Welsh heavy metal heroes Bullet For My Valentine surprised moshers over on The Pit Stage, playing a setlist of songs from their discography.

And that was it for another year packed full of music, comedy and memories that will last a lifetime. Now we just need to find a way to speed up time and fast-forward to Reading 2020.

Buy tickets for Reading 2020 here
BACK TO HISTORY