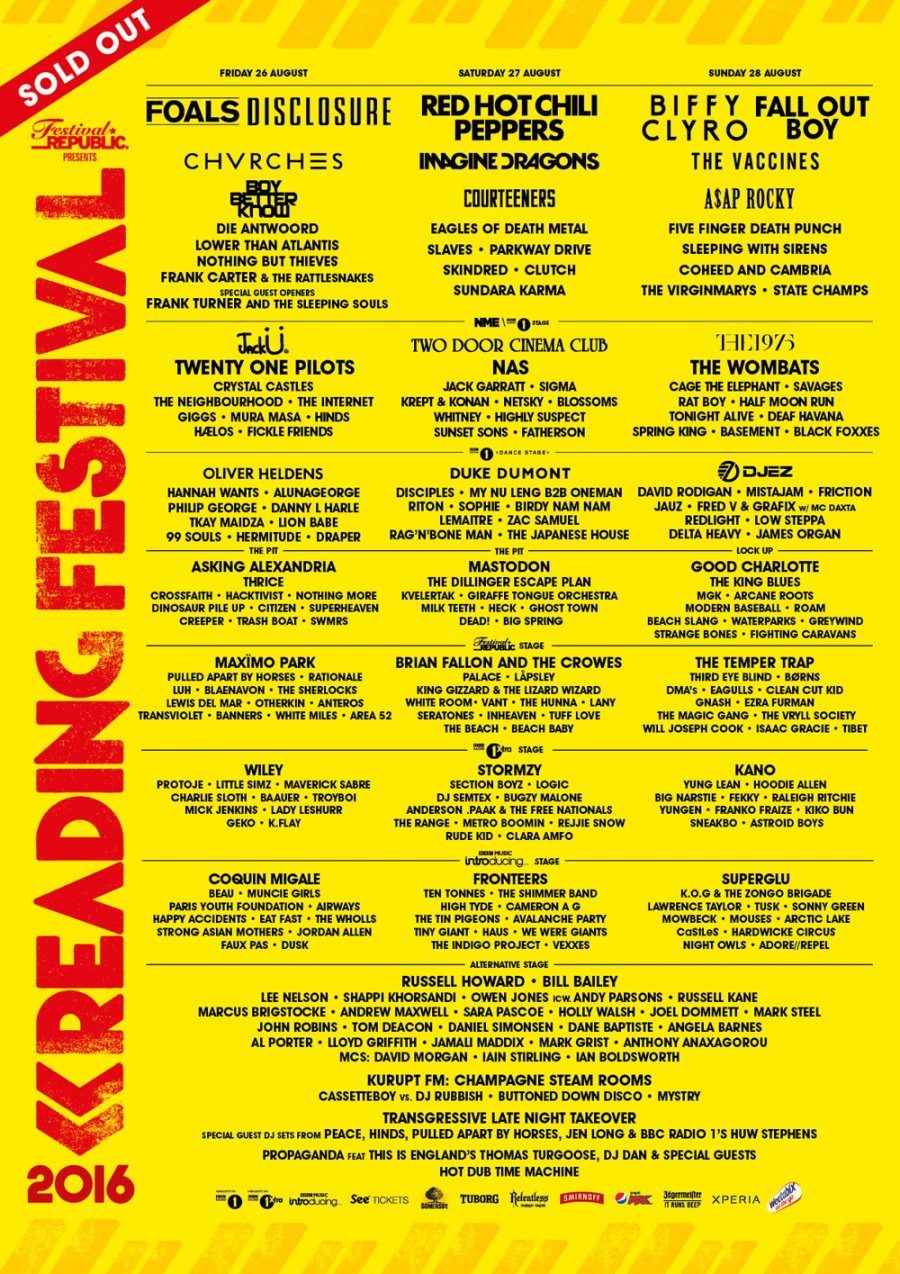 Reading Festival 2016 was jam-packed with some of the best memories and moments from our epic line up. Want to relive the madness or simply find out what you missed out on? You’ve come to the right place.

Frank Carter played the Main Stage with a massive crowd and a huge circle pit, the biggest of the weekend, which went way out into the Arena and circled the mixing desk.

“I have waited for this moment since I was 15 years old; it’s everything I’ve always wanted.”

Die Antwoord spread a healthy dose of Zef culture and rap-rave all over a huge crowd, with them going wild to ‘I Fink U Freeky’.

Boy Better Know, featuring the Mercury Prize-winning Skepta were one of the main draws on the Main Stage in a late afternoon slot and CHVRCHES spread their synth-pop goodness after them, again with a huge following.

The evening ended on a high, with the co-headlining slot of Disclosure making their Main Stage headline debut and Foals ending the evening having scaled the bill over the years as their career had progressed.

Elsewhere Crossfaith the dance/metal crossover from Japan put in an extremely solid performance to a packed tent on The Pit stage, including their triumphant cover of ‘Omen’ by The Prodigy, which sent the crowd wild.

Ken: “The first time we played was in 2013 and then in 2014 and this festival is one of my favourite festivals in the world, there are so many genres.”

Hiroki: “Here we can watch a metal band, a DJ set, indie music and dance stuff, it’s really cool. We are really happy to be back playing here.”

The Dance Stage closed with Dutch wonder kid Oliver Van Heldens and Skrillex and Diplo – as Jack Ü – closed the Radio One tent in style – the tent being still packed after a triumphant set by Twenty One Pilots that was worthy of a headline slot.

The day kicked off at lunchtime with local boys Sundara Karma, followed by a rare festival appearance by the amazing Clutch, quickly succeeded by the ‘ragga metal’ of Skindred, with Benji getting the crowd going crazy whilst doing the ‘Newport Helicopter’.

“It was quite a thrill, I for one never thought we’d do it – playing the Main Stage.”

Parkway Drive produced the biggest dust-cloud of the weekend, from some of the biggest circle pits that Australian metal has to offer.

“This was our first time at Reading Festival and we got to play the Main Stage and it was pretty damned good! We felt happy and I hope that everyone else was happy because it looked like a riot.”

Slaves proved that they can really work a crowd and a gigantic crowd at that – future stage headliners perhaps?

Eagles of Death Metal returned like all-conquering heroes, with a guest appearance from Brent Hinds of Mastodon on the first song ‘I Only Want You’. The set also included a Bowie cover and a Duran Duran cover in a master class of crowd-pleasing.

On other stages, The Pit treated us to the new ‘supergroup’ – Giraffe Tongue Orchestra – featuring members of Mastodon, Alice In Chains, Mars Volta and the Dillinger Escape Plan and a stage-closing near perfect set by Mastodon. Covering tracks from the majority of their back catalogue and a guest spot from Neil Fallon of Clutch on ‘Blood and Thunder’ they pleased everyone who filled the tent.

“Very excited to be here tonight, we’re headlining The Pit Stage and very much looking forward to it. We’re happy to be here and have always had a big following in the UK and it’s finally paid off.”

Brian Fallon played his first post Gaslight Anthem set with his new band Brian Fallon and the Crowes, headlining the Festival Republic Stage and Two Door Cinema Club closed the NME/Radio One stage in style, with tracks from their first two albums and a smattering of tracks from their new album ‘Gameshow’ – due in October.

The final day of the festival arrived again and thoughts of who would headline the following year were already in the air, but this didn’t stop people from making the most of the last day of Reading ’16.

Basement played to a very crowded NME/Radio 1 Tent and the Main Stage was doused in showers as Coheed and Cambria played – Claudio Sanchez slipped on the stage twice, once damaging his guitar, which he then went on to smash to pieces, laughing all the while as he destroyed it. Coheed also performed an amazing version of ‘Drain You’ – almost twenty-four years to the day since Nirvana played it as their second song when they headlined the same stage in ’92.

Sleeping With Sirens had the crowd screaming and Five Finger Death Punch proved how professional they were at working a large crowd.

A$AP Rocky made his progression to the Main Stage and The Vaccines returned for what could be their final supporting slots. Bill topping must beckon them now.

The Main Stage ended with two of the most polished of acts, both masters of their genres and huge crowd pleasers.

First up in the ‘co-headline’ slot was Fall Out Boy, no strangers to Reading, their nineteen-song set was littered with hits spanning their career and proving their longevity. A show worthy of their stature – flames, explosions and dancing girls – they owned the stage that night, for the duration of their set at least.

The final act of the weekend on the Main Stage were Biffy Clyro, back for their second headline slot, previously having topped the bill in 2013. The crowd were enthralled as songs were featured from most albums, including many tracks from their new seventh album ‘Ellipsis’, which was released a month before the festival. Quite a full set list, which sadly flew by as the crowd sang along word for word, such dedication from their fan base in attendance. ‘Mon the Biff!’

Elsewhere the festival rocked out in style. Arcane Roots returned to Reading for the second time with a higher slot on the Lock Up stage, as did the recently reformed King Blues who played before the nostalgia trip that was Good Charlotte, back for a tent full of tunes.

Adam: “There is a ‘Holy Grail’ of festivals that you just have to play or else you feel that you haven’t done your job properly, Reading and Leeds are at the forefront of those, so it’s just amazing to be back here again, a little bit later on in the day – which is always an honour. Our stage is quite a ‘punk’ line up, so hopefully today it will be rammed.”

The pure pop joy of The 1975 filled the Radio 1/NME tent, supported by the return of The Wombats and US indie legends, Cage the Elephant.