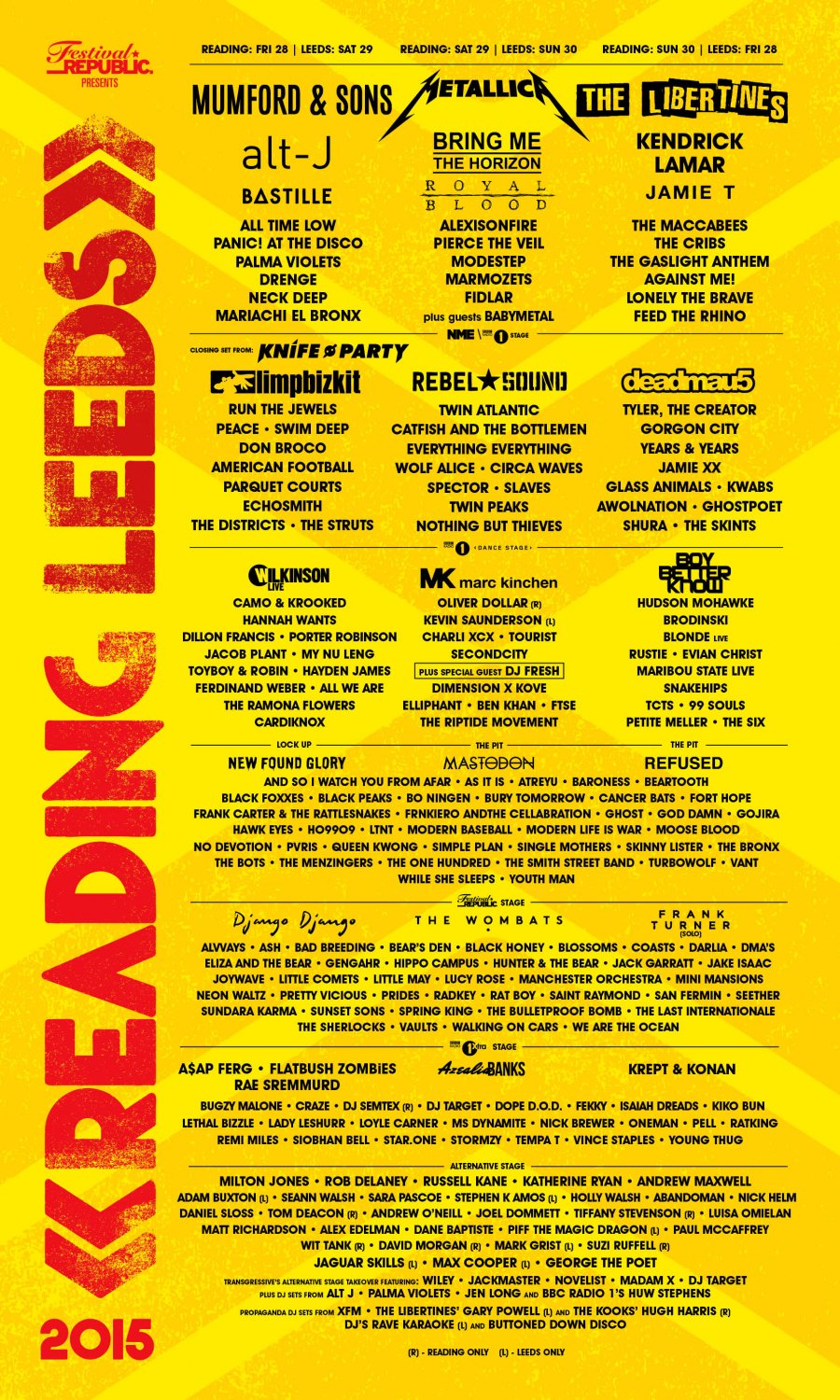 With two new festival headliners in the shape of Mumford and Sons on the Friday and The Libertines on the Sunday stepping up to the plate, the festival is always open for new blood in the top slots and they both drew a huge reaction. Saturday was headlined by the mighty behemoths that are Metallica, back for their 4th slot at the top of the bill, but in the middle day instead – every time that Metallica had headlined before had been as the festival closing act on Sunday.

Opening Friday on the Main Stage were Mariachi El Bronx for their first appearance of the day – they’d also play the Lock Up stage later as The Bronx. With the sun shining, their Mexican style music was the perfect start to the weekend. Neck Deep, fresh from playing the Vans Warped Tour stateside followed, proving that they surely will be a one to watch as they scale the bill in years to come.

“It was a very, VERY, big moment. Often when you’re playing you ‘zone out’ and think about what it is you’re doing and I had about ten of them whilst we played. I thought a lot of people would come out to see what was happening on the Main Stage, but a lot of our fans were there, we had a lot of ‘sing-alongs’ and a lot of mosh pits.

To be able to play Reading is just insane, to be able to say that we have walked in the footsteps of Kurt Cobain and Nirvana, it’s INSANE!”

Also on the Main Stage were bands that had been gradually growing in stature, with their billing being the perfect indication. Both alt-J and Bastille put in rapturously received later slots, while Panic! At The Disco and All Time Low both returned like all-conquering heroes and played next to each other in the late afternoon.

It’s our 4th time coming back and playing and we’ve been gradually moving up the ranks, so we played on the Main Stage; just an amazing show.”

Other mentions for Friday have to go to a revitalised New Found Glory who topped the bill on the Lock Up and Limp Bizkit heading up the NME/Radio 1 Stage, both taking us back to the 90’s like it was only yesterday. American Football, emo legends, also played an extremely rare show in the tent in the afternoon alongside reformed hardcore legends Modern Life Is War.

“For me playing Reading it’s beyond a dream. As a kid I always heard about the festival and how big it was and the fact that you get to be on a poster with some of these bands that you grew up listening to, it’s really awesome. We bumped into Fred Durst and talk to him for a bit! It’s flattering that we are invited to be here and even be a part of it.”

“It was our first time at the festival and the largest crowd we’ve played in front of, so it was very exciting, but a little bit intimidating. Hopefully I’ll catch Run The Jewels today as well.”

“It went surprisingly well. It’s always weird playing in the middle of the day to a bunch of people that you assume may never have even heard you, but there were enough people there that seemed to be into it, it was great.”

Saturday soon began being billed as the ‘rock’ day – what else could you expect from a bill sandwiched between Babymetal and Metallica?

Babymetal may well have had the biggest crowd ever for a Main Stage opener. Su-metal, Yuimetal and Moametal took their brand of J-Pop and heavy metal to the crowds, with hundreds of fans at the front wearing their exclusive Babymetal t-shirts. PVRIS also showed the shape of great things to come and Atreyu returned after a lengthy hiatus.

Marmozets and Royal Blood were incredibly popular with both their transfers from the NME/BBC Radio 1 Stage last year to the Main Stage made exceedingly easy by the crowd hanging on every note and word from each band.

“It was a really, really good gig. We were pretty proud of ourselves after it. At the start of the year when we got the calendar through, this was right at the end and it’s always the one that you circle in red on your calendar. It’s one to tick off the ‘bucket list’, playing Reading’s Main Stage.”

Others that were lapped up by the fans were the reformed Alexisonfire and Modestep, who arguably got the biggest crowds of the afternoon.

“It was our first time EVER at Reading Festival and I was very nervous because the crowd out there was bigger than any I had ever seen in my life… and we opened up for Metallica, so I was very happy.”

“This festival is the first one that I went to as a kid and came to for the next ten years, so it’s a personal one. We started on the smaller stages a few years ago and now to be here and see that we are getting good responses, it’s a humbling experience.”

Two bands that had masses of people discussing their future headliner credentials, Twin Atlantic were favourites in the NME/Radio 1 Stage while Bring Me The Horizon played a crowd destroying set before the headliners.

Special mention also has to go out to Mini Band – the YouTube ‘Enter Sandman’ sensations – who opened The Pit. The band, all under 15 and excellent musicians, got to meet their idols Metallica later in the day.

“We were super excited to be playing at Reading again this year, we last played six or seven years ago, had a little bit of time off, recharged the batteries and anticipation was building. We were so happy that a bunch of dudes who play punk rock from Orange County, Southern California, can be over here on this huge show, there’s really nothing like it in the US.”

“Reading and Leeds are both historic institutions, with so many classic appearance over the years, which feels fantastic obviously.”

Sunday began with Lonely The Brave making an easy transition to the Main Stage and it wouldn’t surprise us if they go the way that Biffy Clyro did, with a gradual climb up the bill over the next few years.

“It was a dream come true. We all came to Reading as teenagers and the Main Stage is the stage that you always want to be on, but don’t think you’ll ever get there. Walking out it was a real ‘moment’, it doesn’t really hit you until you walk out on the stage and then it’s crazy.”

Against Me! put on the punkiest of sets and The Gaslight Anthem gave their final show before going on their indefinite hiatus. The Cribs made a triumphant return to the Main Stage, with this their eighth appearance at the festival.

Kendrick Lamar played a popular set prior to the headliners, playing tracks from all his albums including this year’s ‘To Pimp A Butterfly’. The Libertines played to the converted. Friends, fans and followers all sang along to their greatest songs including ‘Don’t Look Back Into The Sun’, ‘Can’t Stand Me Now’ and ‘Up The Bracket’, providing a fitting end to the weekend.

On other stages Frank Turner the punk/folk rock troubadour played his 9th Reading Festival in a row to a packed Festival Republic Stage. On the NME/Radio 1 Stage, Deadmau5 gave the Dance Stage some competition with his headline slot cramming people in from front to back.

“This was my 9th year in a row at Reading Festival, which is the record by about a thousand miles and I’m very proud of it! It’s got to the stage where the guys say, ‘go on play’ so I did a solo thing this year. So it was a low-key gig this year, which is mad because I headlined a stage!”

“I remember as a kid reading about Reading Festival in Circus Magazine and Hit Parader, not understanding what it was, but that all my favourite bands were playing there. How incredible it looked playing to all those people and wishing that one day I’d get to go to the festival and see all that and now I’ve not only got to see it, but play it four times. I felt nothing but blessed to be able to play it again in another project and a different stage, it’s such an experience. It’s one of my favourite festivals ever.”

Then that was it, another amazing weekend over. Filled full of memories and great experiences and another wait of 12 months for Reading 2016.