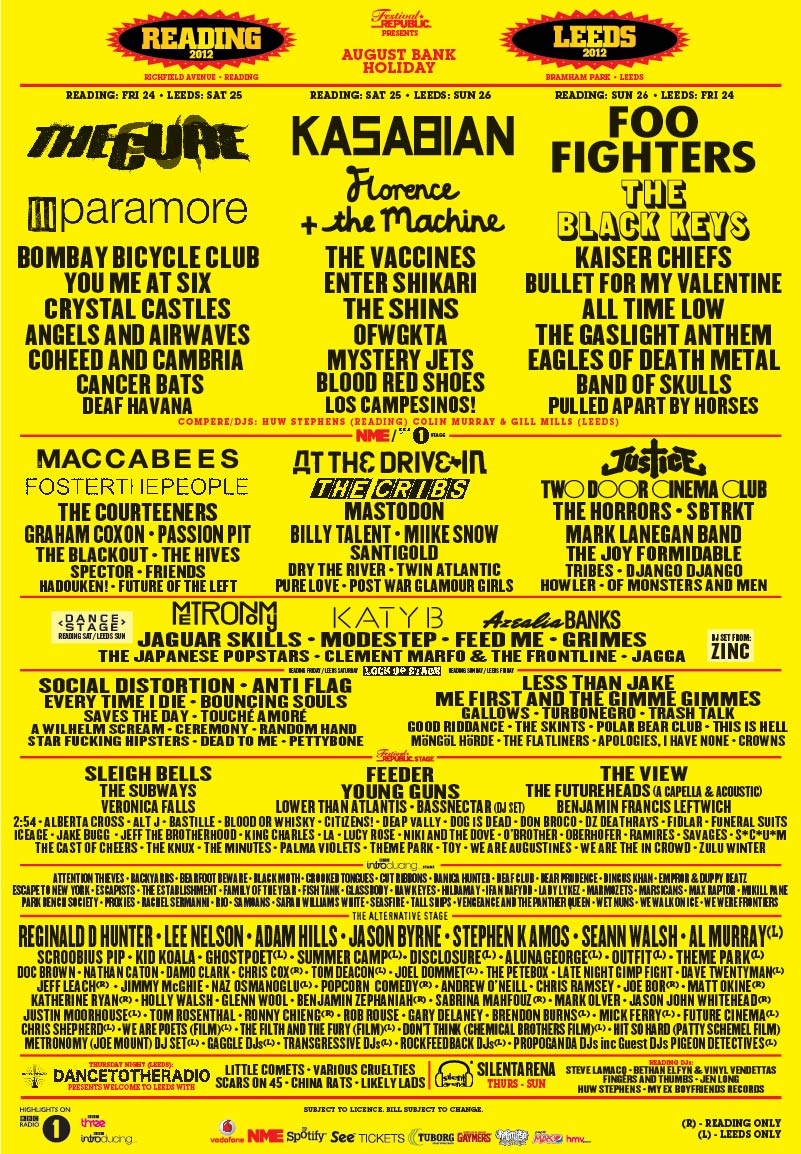 “It seals the summer.”

“Reading & Leeds Festival 2012, more than just a music festival it is a rite of passage”

This year was massive for headliners, from the indie/goth legends the Cure and their three-hour set to the debut headline performance from Kasabian to Foo Fighters closing the proceedings in a true rock god fashion.

Paramore made their third Main Stage appearance on Friday, with headline status only a breath away. Florence + the Machine left the crowds wanting more on the Saturday and Sunday featured the Black Keys, indie guitars and a back catalogue to die for, proving that their slot was greatly deserved.

Other bands on the Main Stage included festival regulars Cancer Bats, Coheed and Cambria and Kaiser Chiefs who still proved themselves to be a great festival band.

The NME Radio 1 Stage had headline slots by the fast-rising Maccabees on Friday, Saturday had the recently reformed At The Drive-In back for a second time and a Sunday festival closer by the electronic French dance legends Justice, who had built up a massive UK following having played a full sell-out tour in Britain the year before. There was also the ‘secret set’ by Green Day at 11:30am on this stage and it was absolutely packed to the rafters, everyone having found out about the set before it was due to take place.

If you looked through the lower reaches of the Festival Republic Stage you would find performances by Bastille, Alt J, Jake Bugg and Palma Violets, the quality of the supporting line up on this stage was second to none.

The Lock Up included the UK festival debut of Me First and the Gimme Gimmes, the punk supergroup covers band and one of the early UK shows of Frank Turner’s new hardcore band Möngöl Hörde, who ended their set with a cover of Nirvana’s ‘Territorial Pissings’ – all was good in the world of the festivals tent shows!

So as another festival came to an end with the sound of Foo Fighters’ ‘Everlong’ reverberating in our ears, we strolled back to our tents, hotels and journeys home extremely content, pleased that we had caught some amazing bands at another year that delivered the goods to a very high calibre.