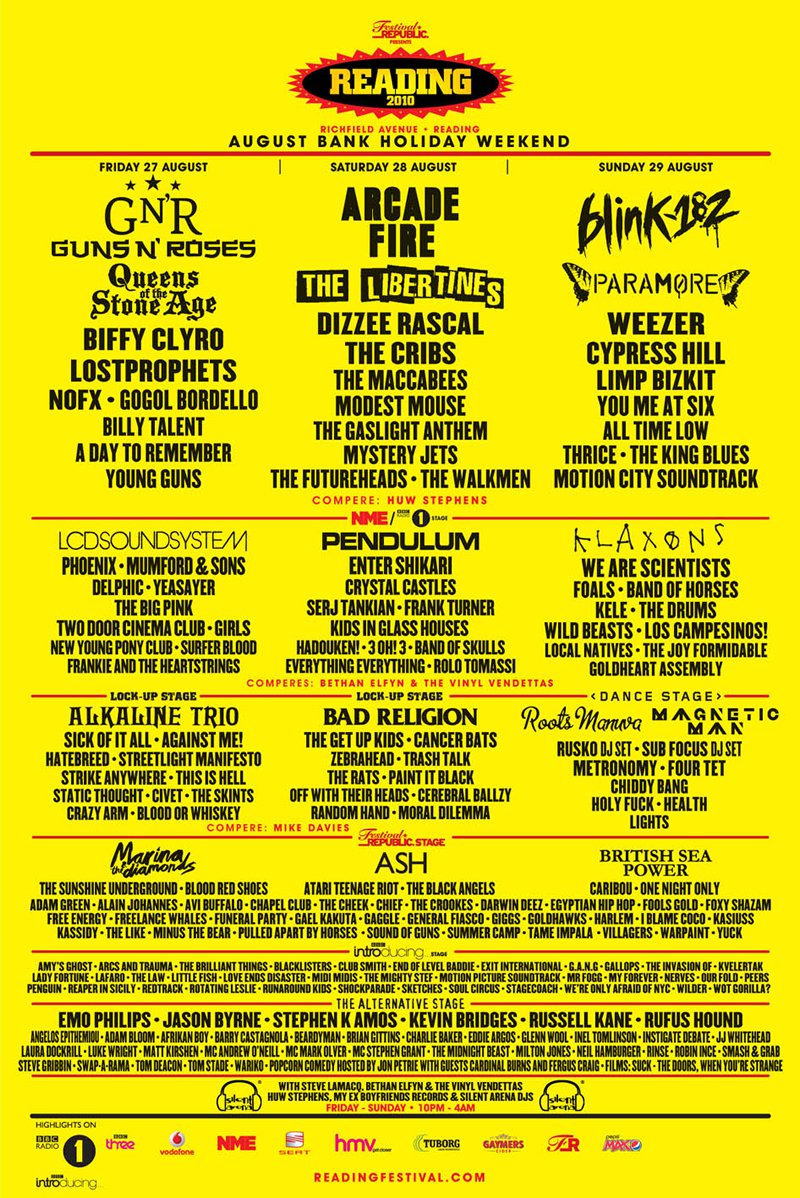 2010, another decade begins and Reading Festival continues to expand its musical content, flourishing in sunny Berkshire.

Carrying another high-quality mixed bag of musical genres, Reading Festival again prepared to deliver an amazing weekend for the crowds.

The Friday had master classes in metalcore from A Day To Remember, Canadian rock for the masses from Billy Talent and a virtual greatest hits set from Lostprophets. Biffy Clyro continued their festival bill ascension and the return of the ever popular Queens of the Stone Age was met with adoration, usually only bestowed on the mightiest of headliners!

The Libertines made their long-awaited reunion on the Main Stage on Saturday and Arcade Fire delivered a headline performance that proved to be the shape of things to come for the Canadian superstars. The Cribs delivered one of their final festival performances with Johnny Marr and The Gaslight Anthem brought a large and rocking piece of New Jersey to Berkshire.

Sunday’s line up on the Main Stage was designed for fans of US pop punk, with stand-out performances by Paramore in the guest slot and a first headline slot for the recently reformed Blink 182. With sets earlier in the day for Weezer, who were returning to the UK after a long absence and a rare UK show for Motion City Soundtrack, a band destined for greater things, in an ideal world. Limp Bizkit & Cypress Hill both made return appearances to the Main Stage, You Me At Six and All Time Low delivered a mid-afternoon double whammy of pop hooks and The King Blues proved that they were building on their previous album ‘Save The World, Get the Girl’ and played a few new songs for the large early afternoon crowd.

Elsewhere over the weekend, Pendulum headlined the NME/Radio 1 Stage, putting in their first festival headline show and Klaxons proved that they were still on form and made the crowd theirs in competition against Blink-182.
Ash & British Sea Power put in sterling efforts to captivate the crowds on the Festival Republic Stage and the Lock Up carried a quality line up of punk and metal in the shape of Alkaline Trio, Sick of It All, Bad Religion and sets from Cancer Bats, Against Me!, Zebrahead and an early afternoon crowd pleaser from Crazy Arm.

The festival was again over too quickly, with anticipation starting to build the week after in regard to the next year’s headliners.